The first week of March was a tremendously busy and exciting week for GMDS. The production of John B. Keane's play The Field had been in rehearsal since Christmas. Members of the Society and the cast met in the Theatre and helped put the set together on Sunday and Monday (4th and 5th March). A quick break had to be made on Sunday to allow paint to dry (and watch Ireland just hold off France in the second half of the rugby!!) Final rehearsals happened Sunday and Monday night, most of the play was set but some scenes had to have some changes at this late stage. Tuesday night saw the show open to a full house and from the start the audience responded to the lively characters on stage.

The Field is perhaps John B. Keane’s best known play. It was first performed in
1965 and is based on a true story.
In The Field, Keane draws a portrait of rural life in Ireland in the mid-20th
century that is both loving and damning, sorrowful and censorious. In the
hearts of villagers involved in the cover-up of an act of violence there is brutality
and cowardice sitting alongside humour and wit, there is a powerful loyalty to clan and class, and
a fierce love of the land.
This staging marks the 10th anniversary of the death of John B Keane and marks the 40th Anniversary of GMDS.

We
produce a play and a musical every year and have made our home in the
Mill Theatre, which is a great asset to the community. If you are interested
in becoming involved either on stage or back stage, we would love to hear from you. Please contact us at info@gmds.ie and join us on facebook. Notice to members, please keep an eye out for notice of AGM on May 24th and next activities. We may attend the Choral festival in New Ross in May and we will be back in the Mill Theatre on Dec 4th-8th.

Thanks to everyone who helped with the production of this play. To our patrons Pat Kinsley, Eileen O'Sullivan, Sean Murphy, Alex White TD, Cllr Jim O'Dea, Lillo McGuinness, Deirdre and David O'Sullivan for providing much needed support. Thanks to St. Tiernan's  Community School for rehearsal space and to Tony who looks after us there. Thanks also to the 137th Balally Scout Group for time in the Scout Den. Thanks to the staff in the Mill Theatre. Thanks  to the Blue Light pub, Bective Rugby Club, Specsavers (Dundrum) and everyone else who helped with props. Thanks to our own Tom (Auctioneer and Publican Mick Flanagan) and Colm (The Bishop) for the hard work building the set. And finally Thanks to committee and members who helped in many ways behind the scenes. 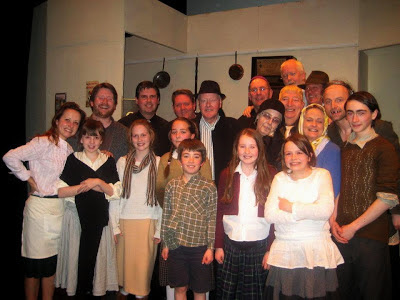 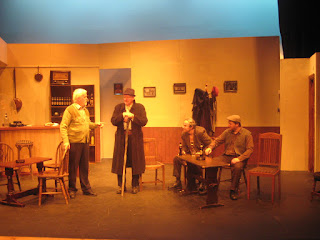 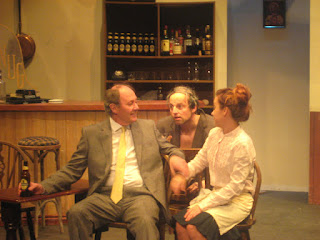 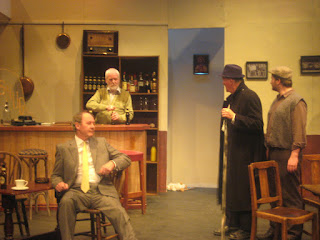 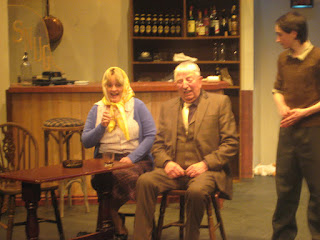 Trouble. The Bull (Liam Corrigan) and Tadhg (Peter O'Brien) have heard of the intentions of William Dee (Jim Blake) to buy the field.

Posted by James Coleman at 11:13 No comments: