Posted by James Coleman at 04:48 No comments:

Blockus - it's a bad idea to forget about ALL your opponents! 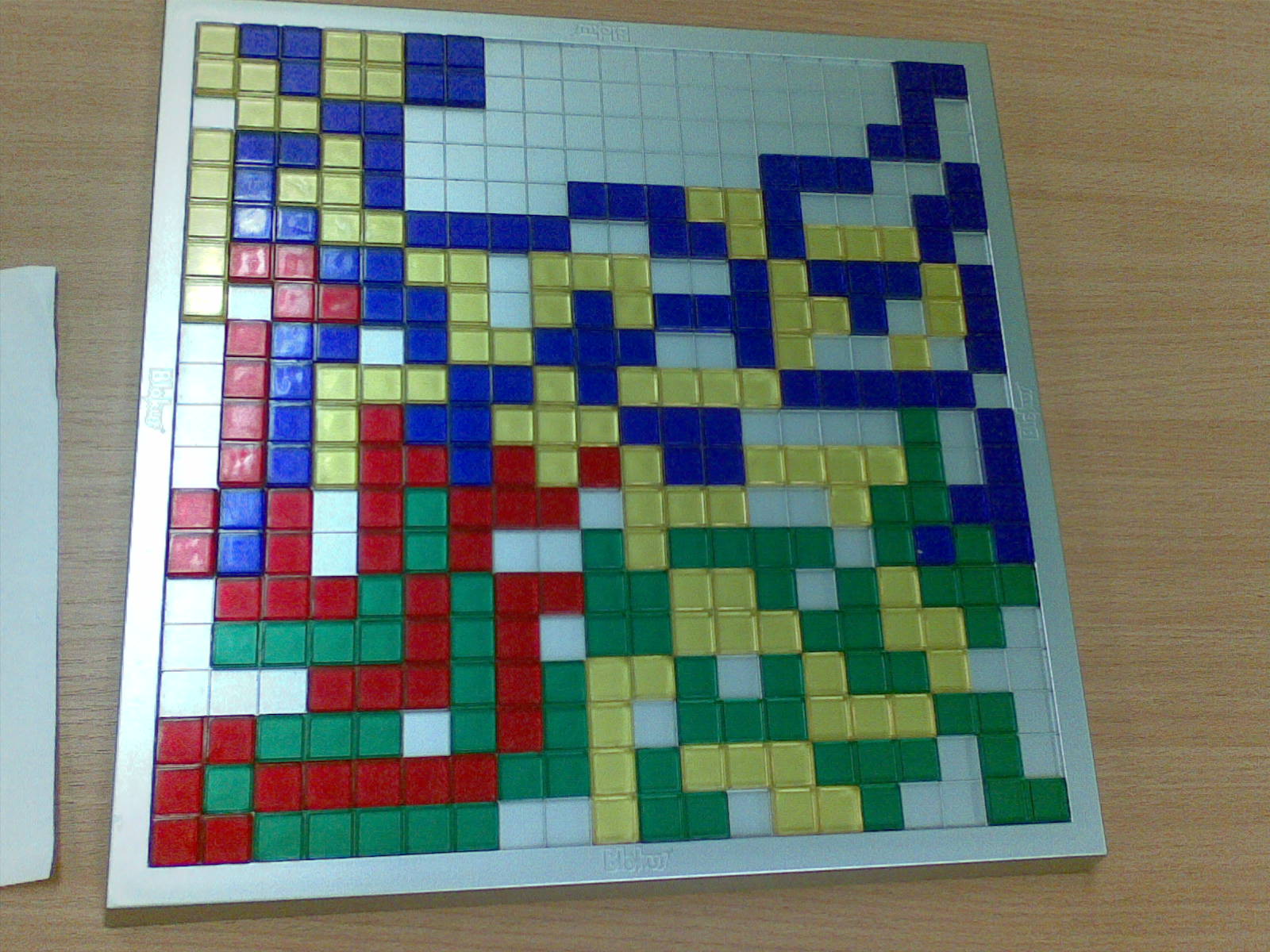 Look at the lovely big fertile blank area :)
Posted by James Coleman at 06:29 No comments:

If you receive a package labeled "metal detector" in Ireland you might get teased a little bit about it. :) 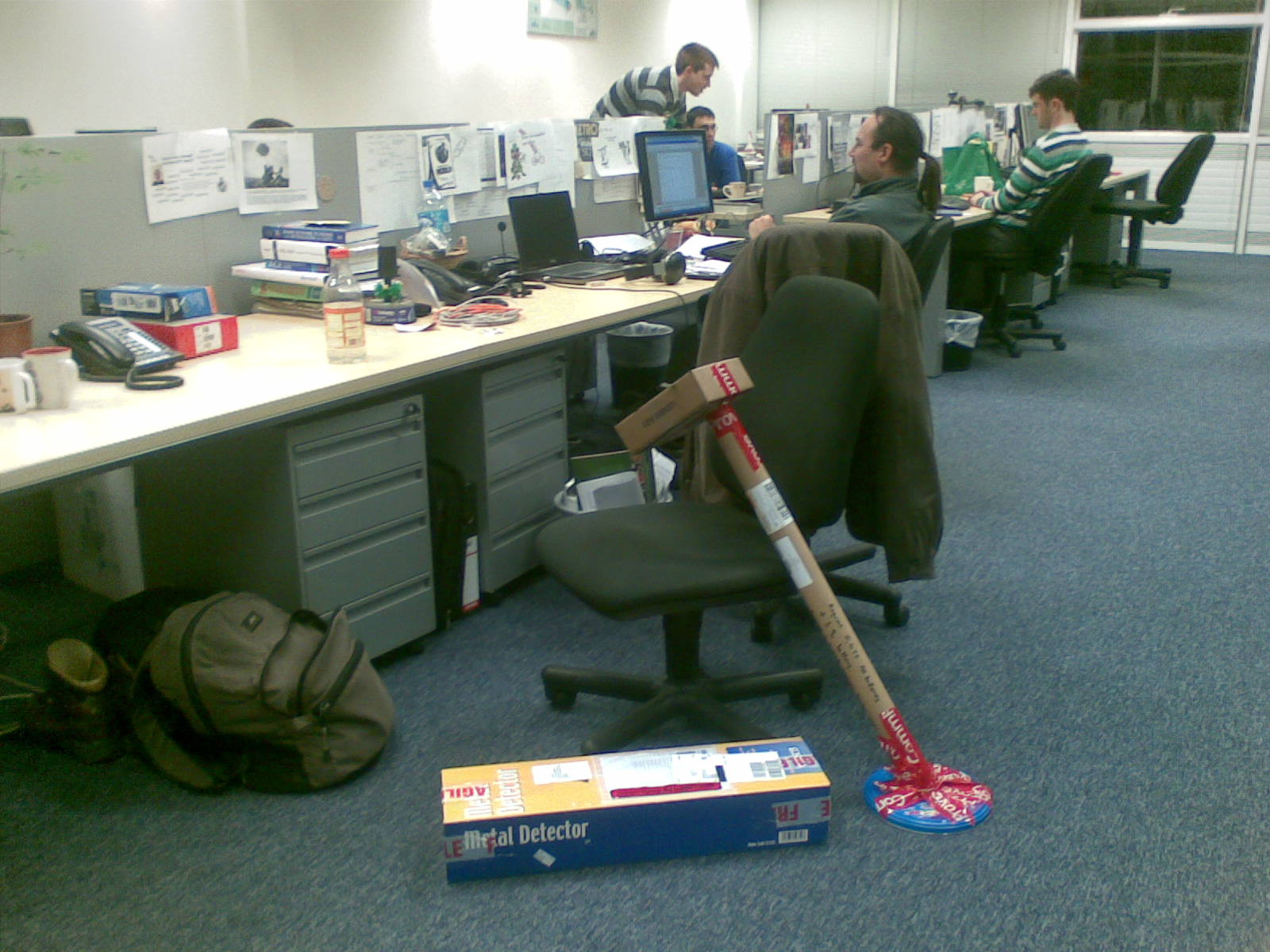 Rechargable batteries and Led and energy saving lightbulbs also from maplin.
But where's the capacitor for the sewing machine? :(
Too small?
Posted by James Coleman at 05:39 No comments:

Quite a mad week.
Week and weekend before rehersals. Costumes and pieces come together.
Also on Sat loading set into truck from warehouse and collecting lots of wood and likely props from container.
And on Sun unloading truck into theatre. Good fun :)

Rehersal on Monday. Whole evening from 6 to 10.
We could watch kids a bit do their bits.
Run through in order - in Boy for Sale a disembodied voice (Helen) yelling go further over James!
During the week we come in from other side (House Left) and Ronnie gets a chimney sweeps brush by Thursday (as "there's always a sweep in Dickens" :) ). Quite enjoyable pretending to size up the lad for sale and discussing different things (mostly in own head!) each night.

Consider yourself is next for me/us chorus adults.
That's the run into stage (past Dodger and Oliver with wheelbarrow coming off) middle front for me with Deirdre.
SING and prance. Pause briefly "yadda rhubarb". SING and prance and walk off "chat yadda".
It took us a good while (right from the start of all the rehersals) before we weren't making a mess and fogetting each step/action. I hadn't a partner for it for a while. I think the girls took it in hand one week and more or less decided I might just about be able to do the dance (after ALOT of practice). Not sure. Brilliant fun to dance with D. Lovely to turn to an amazing smile at "we're going to get along".

Act II opens with oom pah pah.
No tables for oom pah pah. A bit more awkward as we were able to lazily lean on the tables.
I quite like oom pah pah! :) In rehersals John Power gets up to introduce Nancy singing "Goddess of virtue" "uohhhh" and I call over Niamh to sit on my knee. At end of oom pah pah we all get up and go in hailing Nancy but then "It's Bill Sikes" yikes scared and Caoimhe was on my knee. On stage we were standing but after Bill Sikes came it changed a bit - usually cowered in corner with Valerie and John and Ciarán when he got thrown over to us.

Later on walk on stage for singing who will buy (reprise) as dancers come in again.
Then down onto street to see Oliver get caught.
And off.

On again just after Nancy's murder is discovered and off as a lynch mob to catch Fagin in the 3 cripples.

Finally the finale. Mash through crowd each night to get closeish to front. If I find Valerie I'm about okay. Kids first all up around platforms. Then chorus in - Consider yourself - no dance. Then Oliver comes into middle. Then 2nd principles and principles.

Shows each night Tue - Sat with 2 on Thur and Sat.
No bother with the chorus pieces for me but after bringing coffin's on/off or table off I feel a teeny bit shaky at start.
Unrehearsed bit. Big coffin is awkward. Though I quite like it :) chuffed. Very funny that.

Oh oh! I got to fire the gun on stage Tue. :) And kill poor Bill.
Took aim, click! misfire. :-o steady. BANG! uohh pretty sparks.
It's loud and makes peoples ears sore :( Chris fired it Tue and it was fired offstage Wed/Thur/Fri and Carl did the deed each night.

Thursday night party in Liam&Ailish's house.
Before that home and chat. Fionn's Mum & Dad came to see the show with Sheila.
Chat then later singing songs. Carmel lovely depressionb/railroads/...? song. Chris piano. Hilary guitar. Everyone singing :)
Good fun. 2 beer party for me. too much singing :)
Everyone cleared out at? 2? Probably. Except for a couple of people smoking out the back!

Last performance Sat 8-10.
Set disassembled and truck loaded at end of play. Daire home with Ray & Fiona & kids.
Party on Saturday in Dundrum in a little Spanish restaurant - Buona Sera. OMFGIWFBIFIL22T! :) W2TA4O5C.
And jaypers too.
Daire got home from kids party 2:30. I got home 8am. Taxi with Lisa, Carl Niamh. Frosty.

Sunday bed 8am, up 1:30.
At 2pm unloaded truck full of the stage set again at Nick's house. (cycle out)
I had thought there'd be maybe one or two people missing but not at all!
Kids and I got our Christmas tree Sunday too in Murphystown stone.
Kids decorated it all themselves.

Monday 9 kids did not have school so I was at home with them.
Did merges for work though - about 4 of them.
Tue work from, home. Fionn to funeral in Cork.
Wed back to work.
Thur & Fri I also took holidays and I was sooo relaxed after Thur.
BUT now (Tue Dec 10 I've got an awful chesty cough. ARGH! :-( BAH.
Posted by James Coleman at 08:12 No comments:

Oliver playlist with backstage from my point of view

Here is something like what really happens backstage from my perspective (leaving out loads!)

get ALL the kids QUICK QUICK!

Ready to enter from House Left, Chris Aoife James Dee .. ..
Watch out for wheelbarrow coming off.
Need to really RUSH on fast.

Hello Daire! Time for a cup of coffee and a biscuit and a chat for some adults.

onstage for curtain up for oom-pah-pah
This is all changed so not sure what's going on! At House R with Niamh at start.
After Bill Sykes arrives back to house R cowering with Caoimhe or Valerie or ...
pubness and drink (gin) and laughing and chatting.

nobody is walking on to buy strawberries/milk/... anymore

move into stage, up steps onto back platfrom.
Carl - Carmel and me - Gareth and John Power - Brendan below.

JOYOUSLY! :) to sky and other chorus singers

Posted by James Coleman at 05:17 No comments:

I made playlist so I have a vague idea when to go where in the musical.
We've had 2 dress-rehersals Sun + Mon in theatre, staged dress rehersal Tue with full audience and and completely full performance last night.
Tonight a shorter show 5:15 then at 8:00 full performance. Then one Friday and on Saturday matinee + evening.

Snippets of songs (with the lyrics that tend to trip people up):

Posted by James Coleman at 04:02 No comments: